APHRODITE was built by the Purdy Boat Company and launched in May of 1937 for Wall Street financier and later Ambassador to the Court of St. James, John Hay (Jock) Whitney of Manhasset, Long Island.

Best described as a “Commuter Yacht”, this elegant and sleek 74-footer would each morning whisk Mr. Whitney from his large two-story boat house westward down Long Island Sound and thru the East River to his Wall Street office. During the 45 minute commute Mr. Whitney would go up to the forward cockpit and read the Herald Tribune to catch up on the day’s news.

APHRODITE’S guest list over the years reads like a “Who’s Who” in the worlds of government, business and entertainment with such luminaries as Fred Astaire, Sir Laurence Olivier, Spencer Tracy, Katherine Hepburn, Henry Ford II, FDR advisor Harry Hopkins and Nelson Rockefeller aboard for summer day cruises down Long Island Sound. APHRODITE also once served as the site for a birthday party for Shirley Temple.

The day after the attack on Pearl Harbor, Mr. Whitney offered APHRODITE to the government for war service and she was commissioned in April 1942 as a Coast Guard auxiliary vessel (CGR-557). The boat spent most of its war-time career ferrying dignitaries up and down the Atlantic coast and transporting President Roosevelt to and from his home at Hyde Park on the Hudson River.

In the early 1960’s Mr. Whitney no longer needed a boat of APHRODITE’S size and so donated the boat to Anthony Drexel Duke and Boy’s Harbor, a summer program for disadvantaged inner-city youth which operated on Mr. Duke’s estate at East Hampton, Long Island.

In the late 1960’s or early 1970’s APHRODITE was renamed MOONFIRE and under this name she went through a series of owners under which her condition quickly deteriorated to the point where she was parked ashore with weeds sprouting around her neglected hull.

Around 1977 Mr. John Pannell started a marine repair business (Harbor View Marine) on the site of the old Purdy Boat Company where APHRODITE was originally built. In 198 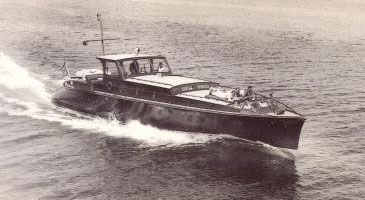 3 Mr. Pannell was approached by a gentleman from New Jersey who told him he had just bought an old boat, would he be interested in a restoration project and added “she’s got MOONFIRE on the transom but I think she’s APHRODITE”!!!! The boat was launched and towed back to her original birth place where she was then hauled and restoration work begun.

The unexpected death of the man from New Jersey shortly after work was begun brought the restoration efforts to a temporary halt. Work began again in earnest when John Pannell accepted ownership of APHRODITE from the heirs as payment for work in progress.

After relaunching in 1984, APHRODITE could be seen traveling up and down the East Coast and in attendance at many classic boat events where she garnered many a prize.

In the fall of 2000 John Pannell sold APHRODITE to her present owner, a true classic boat enthusiast. Despite Pannell’s loving attention to the boat, the new owner found that he could not stop the clock and retain the boats past glory. In the late fall of 2003 APHRODITE was delivered to Brooklin Boat Yard where a complete restoration of the boat is planned to bring her back to her original appearance and to bring her ship’s systems up to today’s standards.

APHRODITE’S REBIRTH
The “Aphrodite” was a complete restoration using the original boat as a template from which to create what would become the reborn “Aphrodite”.

The first stage of this project was to extensively catalog all aspects of the boat for later reference. Once this historical documentation was completed, forms were placed into the boat to retain her hull shape. Next the job of disassembly began in earnest with the removal of the deck, superstructure, bulkheads, all interior accommodations and ship’s systems leaving only the hull in place.

On September 2, 2004 the final original frame (last wood of the original boat) was removed marking the transition from old to new.

Once the all important structural framing work was completed the hull was then replanked as originally built with double-planked, copper-riveted Philippine Mahogany. With a new hull in place the work of engine and systems installation went forward along with the reconstruction of the interior accommodations spaces, new deck construction and the crafting of Aphrodite’s distinctive cabin and superstructure.

On a crisp clear October day in 2005, with a huge crowd made up of Aphrodite’s owner’s, the crew of Brooklin Boat Yard and families and friends from both sides of the project on hand to wish her well, Aphrodite slipped into the waters of Center Harbor Maine to begin her new life.