Every boat we build at Brooklin Boat Yard is unique—some simple, some complex—each present its own set of challenges. The new Jim Taylor 44 racing/daysailer we started building last fall appears to be a straightforward cold-molded wood/epoxy hull with a carbon fiber sloop rig typical of our more recent high-performance sailboats; but look in her bilges for a conventional auxiliary diesel and you’ll have found her defining difference. Instead of a diesel, the 44 will be equipped with an electric auxiliary motor powered from a bank of lithium iron phosphate (LiFePO) batteries, which can be charged by a solar panel array integrated into the aft deck or from shore power. To meet the significant electrical demands of the propulsion motor, we are fitting the boat with a 48-volt DC system. Voltage will be stepped down to 12V for the standard onboard house loads, such as: lights, pumps, and electronics, which will all be controlled with digital switching; forgoing the typical breaker panel and associated wiring.

Pushing boats with electricity is not new. In fact, electric motors have been powering boats since the 1840’s, but until recently they’ve been neither reliable nor convenient for most modern recreational use. Significant advances in motor efficiency, battery technology, and charging systems over the past decade has piqued our interest; as electric propulsion options seemed to be nearing viability. Still, for us to design and install a system in a custom racing sailboat, the technology would have to be reliable, and the use profile a perfect fit. We knew we needed to wait for just the right project as well as a boat owner ready to make this technological shift with us.

The 44 is being built for a longtime client and friend of the shop who intends to sail the boat as a day racer from a marina in Southern California. While accommodations include a head, galley, and several bunks, the client does not intend to take the boat cruising. During preliminary discussions and planning we mentioned that this racing and daysailing use profile, combined with the fact that the boat will be kept at a marina berth with electrical service, really suggested the possibility of an all-electric boat. The client agreed.

In this series of articles we’ll share a detailed look at each of the components, (motors, batteries, solar, digital switching, etc.) that make up this new system, how they work, why we choose them, and how we integrated them to create a robust, custom power and propulsion system without an internal combustion engine. At the heart of our design is the electric saildrive motor, so let’s take a look at that first.

Most all modern racing sailboats rely on a diesel or gas powered saildrive for auxiliary propulsion, (Picture the lower unit of an outboard sticking down beneath the hull of a sailboat, with the engine and gearbox mounted above it in the bilge.) They are more compact, easier to install, and more efficient than traditional straight-shaft engines. Turns out, they also lend themselves to being setup with electric motors. Several reputable companies including Torqeedo, Oceanvolt, and Electric Yacht build off-the-shelf electric saildrive systems in a power range that fit our project. We knew we wanted to pair the motor with Victron Energy batteries (a high quality, reliable brand we use in all our boats) and we planned to design the rest of the system ourselves. Oceanvolt and Torqeedo only sell complete systems that include batteries, so we contacted Electric Yacht, a small company based in Minnesota that’s been producing electric propulsion systems for boats since 2008. Scott McMillan, founder and co-owner, had a background in designing motor-control units as an electrical engineer. He also loves sailing, and after years of dealing with smelly, noisy, high-maintenance gas and diesel engines, he realized he could adapt the electric motors and controllers from his day job to work as auxiliary power for sailboats.

While Electric Yacht will design and sell a complete system, including batteries, Scott and his crew were happy to sell just the motor and help us configure it to meet our needs and the capacities of the Victron batteries. We provided them with detailed measurements and information about the boat—hull speed, prop size, etc. Scott then put that into a proprietary spreadsheet he has developed over the past decade, calibrated with a combination of power/speed curves and performance data from over 600 other customers’ boats.

Based on our choice of batteries (we’ll get to that in the next chapter) and Electric Yacht’s recommended motor size, Scott predicts we can expect a 25-nautical-mile (NM) range at 5 knots and a 8 NM range at hull speed (8.4 knots). The unit Scott choose for us was the Quiet Torque 20.0 Sail Drive, a twin motor saildrive meant to replace a 25hp-40hp Diesel engine. At 48VDC, it has a maximum input power of 20 kW, and uses permanent magnet alternating current motors, (PMAC). There’s a whole lot of technical info packed into that last sentence, so let’s start with the PMAC motor.

Typical AC induction motors use current to create a rotating magnetic field in the outer coils (stator) which induces a current in the electromagnets of the inner rotating shaft (rotor); producing torque that spins the motor. PMAC motors have permanent, rare-earth magnets mounted on the rotor, and thus have a fixed magnetic field that creates rotation without induction. Another term for this is a brushless motor (common in today’s cordless power tools). They’re synchronous, meaning the rotor spins at the same speed as the internal magnetic field—no slip, increasing efficiency and helping to provide high torque over the entire speed range. They are also electrically commutated motors. That means unlike an induction motor that can be hooked directly to line power, a PMAC motor requires a variable-frequency drive (VFD), a unit not unlike a small computer with electronics and software to start and control the motor.

The benefits of all this are a more precise speed control (from the VFD), a higher power density thanks to the powerful rare-earth magnets, and cooler running temperatures, which increase bearing life. However, the VFD, like a computer, needs to be cooled, so we’ll install several fans that will help pull fresh air throughout the engine room. In all, it’s a simple, robust and easy-to-install motor that should perform well and need little maintenance over a long life.

The sail drive is designed to draw from a 48V power source. When people think about electrical systems on boats, they usually think 12V or 24V. So how did we end up with 48V? Electric motors can be designed to run at a wide range of voltage. The higher the voltage, the more power you get—power (watts) = voltage x amps. For example, the latest Tesla model S car uses a 400V battery that can push the car from 0 to 60 mph in less than 3 seconds with 580 kW. Powerful, yes, but 400V is high enough voltage that, if you didn’t know what you we were doing, it could kill you. Because a lot of marine electric drive systems are retrofit into older boats by their owners, safety is a big concern. American Boat and Yacht Council (ABYC) standards classify anything over 60V as potentially dangerous; requiring additional precautions and professional installation—making a 48V system a good compromise between power and safety. It’s also a popular battery size for home solar installations; making other components more readily available.

So how much power does this saildrive have? Well, that’s a straight forward question with a more complex answer. According to Electric Yacht, the input power as measured coming out of the VFD is 20kW, (10kW from each motor). Of course there is some inefficiency and loss as the power makes its way through the motor and down the mechanical connections from the saildrive to the propeller. While the exact amount of that power loss is unknown, it’s not very much. We feel very good about this drive units ability to push the boat at its estimated hull speed of 8.4 knots. For how long, well that depends on the batteries.

Next time we’ll look in depth at the characteristics of the Victron LiFePO batteries that power these motors, and we’ll compare the overall system’s weight, cost, and complexity to that of a conventional diesel auxiliary engine. 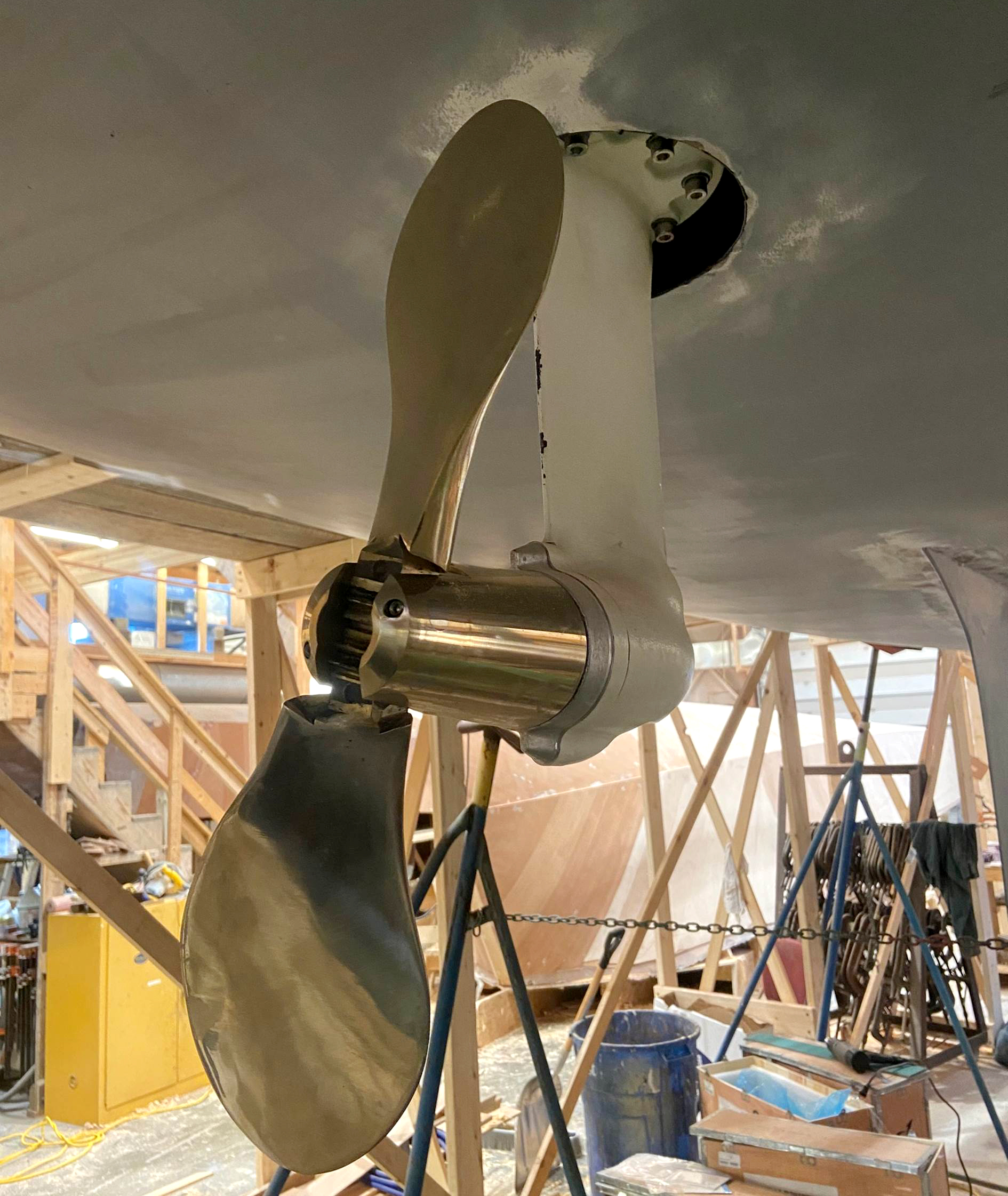 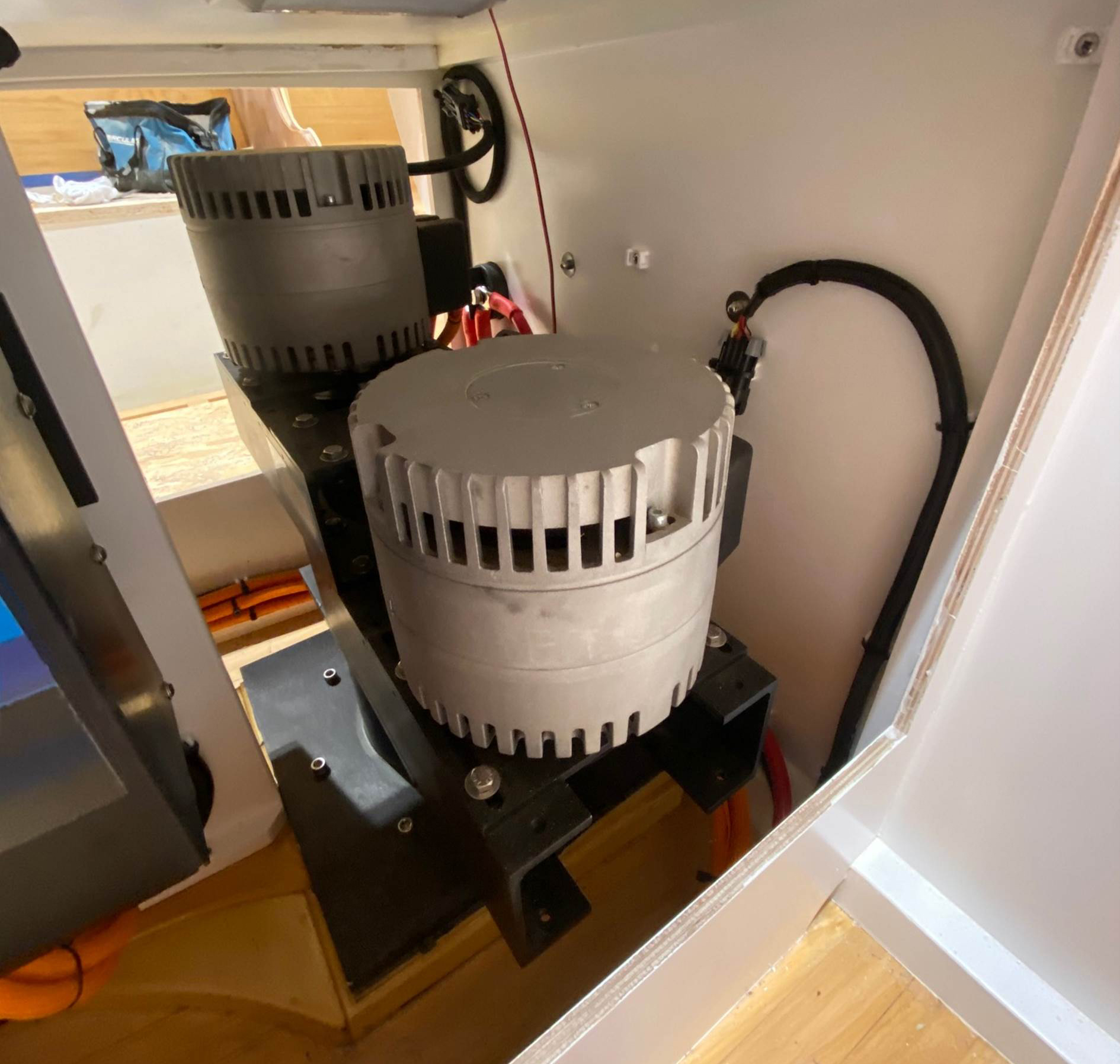 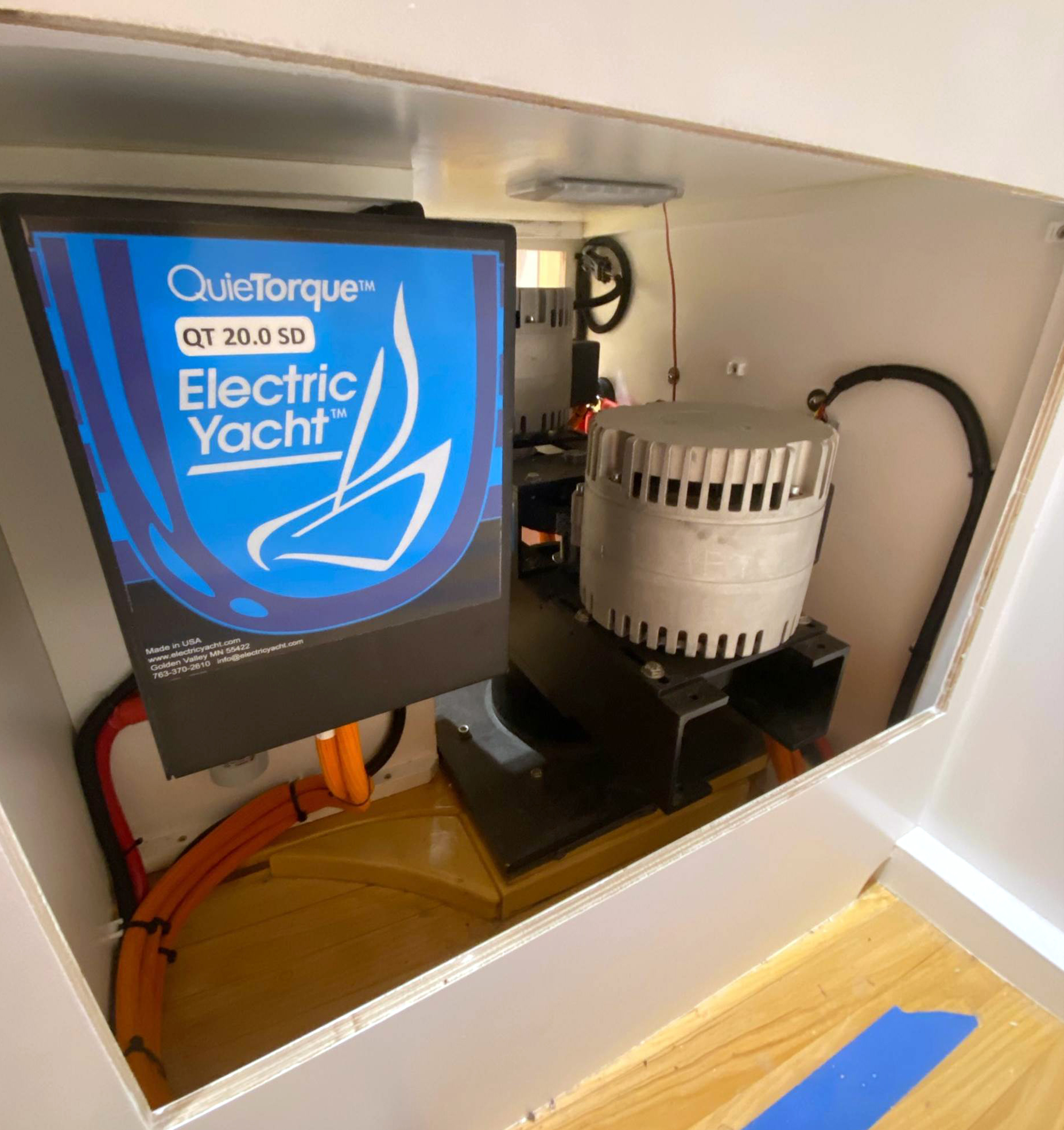