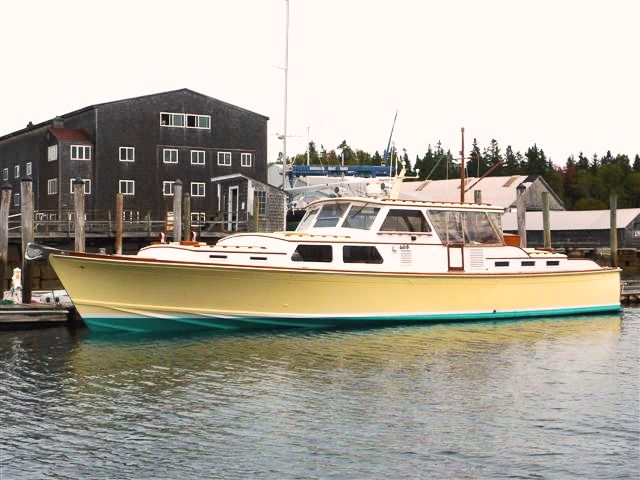 STINGRAY is a 56-foot gentleman’s motoryacht designed in 1962 and ’63 by C. Raymond Hunt and built in 1964 by the Wharton Shipyard in Jamestown, Rhode Island, (now Jamestown Boat Yard), wears her patina the way a veteran of World War II wears his uniform in a Memorial Day parade. Although she suffered periods of neglect during her 49 years of service, good fortune has smiled on her more often than not and each of her two major refits (Renaissance Yachts 1989-1990 & Brooklin Boat Yard 2009-2010) have left her character intact.

She’s the only example built to these lines and has carried her christened name continuously since the first launching. Peter Boyce, senior designer at C. Raymond Hunt Associates, states that STINGRAY is considered to be to be one of the handsomest examples of Hunt’s work. Her low profile, sweeping sheer line and pale-yellow topsides snatch and hold your attention in much the same way a magician corrals his audience.

Sometimes a good deal is too hard to let pass by so after having assessed STINGRAY’s overall condition for a possible buyer (who decided to pass) Brooklin Boat Yard President (Steve White) bought her with an eye not only for his personal use but also as a classic power yacht that should be preserved.

Her delivery from Newport RI to Brooklin ME ran the gamut of weather from flat calm down in southern New England to 30 knots on the nose in the final runs through the islands and bays of the coast of Maine and it was here where Ray Hunt’s deep-V hull design came into its own providing a surprisingly comfortable ride in conditions that might have kept other boats in port.

The first step in STINGRAY’s refit / restoration was the installation of a longitudinal girder system to help stiffen her hull. Her teak decks were removed, deck frames and subdecking replaced as needed and new teak decks laid. All her systems were gone over and replaced or rebuilt as needed and finallya complete interior and exterior repainting and varnishing.

Like many of the in-house restoration projects here at Brooklin Boat Yard STINGRAY was purchased towards the end of her refit / restoration project and her new owners were able to add their own personal touches to the boat before heading South for the winter.